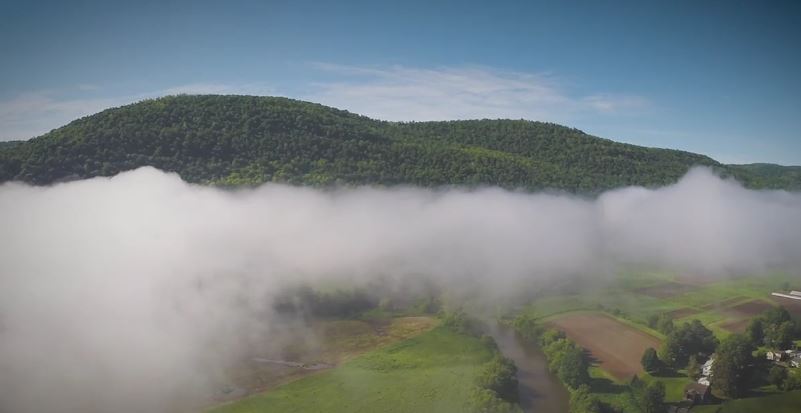 Photo: “More than half of highly addictive drugs come from our own medicine cabinets" observed Vincent Martello at the annual Circles of Caring conference. (Photo credit: Vecc Videography)

December 2018 Walking through the streets of Kingston one rainy November morning, someone could have remarked that the city seemed sleepy. But at the Best Western conference center, a series of exciting talks were being held. On Friday, November 9th the Jewish Family Services organization held their annual Circles of Caring conference, which this year focused on the crisis that is currently plaguing many communities of the Hudson Valley: opioid addiction and the elderly.
The day began with a sobering introduction from Vincent Martello, director of Community Health for the Ulster County Department of Health, who gave a harrowing summary of the epidemic at a national level. Martello cited preliminary statistics published by the Center for Disease Control to explain the severity of the problem: in the United States in 2017, 76,000 people died from overdose, in other words, a toll of 200 deaths per day.

Martello continued on to explain the state of the crisis at a local level, referring to the Hudson Valley as an “epicenter” for the epidemic. This, Martello noted, is in part due to the fact that the Hudson Valley serves as a delivery route for illegal drugs into the country; “when you look at the map of opioid overdoses in the state of New York, it is clear that there is a straight line coming up the Metro North corridor and down the thruway from Canada". The geographic corridor created by the Hudson Valley makes its communities particularly vulnerable to the opioid addiction epidemic. Indeed, in the last few years hospitalizations due to opioid overdoses have increased dramatically in Ulster County.

What many people are not aware of is that a portion of these hospitalizations now includes the elderly. This is in part due to a seemingly harmless offender: prescribed medications. “More than half of highly addictive drugs come from our own medicine cabinets,” Martello notes, admitting that often times the problem starts at home. This observation is backed up by a study from the National Institute on Drug Abuse which found that 80% of heroin users became hooked after using prescribed medicines. The rate of prescription drug abuse in the elderly population is alarming. One article written by professors at the University of Florida cites that “from 1996 to 2010, the number of opioid prescriptions provided to older patients increased 9-fold.” And as a result, “the hospitalization rate for geriatric misuse of opioids has quintupled in the past 20 years.”

Tom McCary, director of the Substance Abuse Prevention program for the Institute for Family Health, shines light on the problem of addiction among the elderly. What for a younger body may have once been a normal or safe level of alcohol use, with age can become ‘risky drinking,’ “especially with the increased likelihood of prescribed medication and medication combinations and body changes.” As we age, the body no longer has such a high concentration of water and in turn the organs do not work in the same way - for example, the liver does not break down alcohol as easily as it once may have.

The problem of addiction among the elderly is one that we cannot ignore, implores Suzanne Cusack, co-founder of Villa Veritas, a rehabilitation center in Kerhonkson which opened its doors for the first time in 1973. In the state of New York, addiction in the elderly population poses a particularly serious problem since out of the 47.8 million people over 65 currently living in the United States, a great portion of them live in New York State. According to the 2010 census, the state of New York has the third highest concentration of elderly in the country. And according to McCary, the problem will only continue to grow; “the elderly population will double and the current use of alcohol and substances of these adults is higher than in previous generations.” The generation which is now approaching older adulthood, the baby boomers (born during the explosion of births after World War II) has a greater tendency towards alcohol and substance use than previous generations. McCary explains that baby boomers have “more alcohol and substance use over the course of their lifetime and they are more likely to continue some alcohol or substance abuse into their older adulthood,” a reality that could easily increase the number of cases of addiction in the elderly.

Is there a solution?

In light of the devastating opioid crisis, Ulster County has had a robust response, Martello believes. After having been identified as a high intensity drug trafficking area, Ulster County has responded with a plan to confront three components of the problem: supply, demand, and quality of rehabilitation treatment.
In terms of drug supply, federal authorities have supplemented their presence to better patrol the area. And to combat prescription drug abuse, 19 medication collection boxes have been established in police stations throughout the county. But Ulster is not the only County protecting itself from the crisis. Towards the end of August, Sullivan County announced a mapping system of overdoses throughout the County, and in October, Dutchess County received a million dollars from a federal grant to mobilize their response to the opioid crisis in the region.

However, combating the issue of drug accessibility can only help to a certain extent; “there is heroin entering [the community] from so many areas, you are not going to stop this by ceasing supply [of drugs], what you need to combat is demand. If not, you can bust all the drug dealers you like; there will always be someone to replace them,” comments Kevin Vecchione in an interview from the documentary Smacked!, produced by Lillian Browne and Jessica Vecchione. For this reason, initiatives such as the medication collection boxes throughout Ulster County play an important role in managing the opioid crisis. By decreasing the ubiquity of these medications, the probability of their abuse will decrease as well.

Furthermore, educational initiatives play a key part in preventing addiction. Videos like Smacked! and the Circles of Caring conference are examples of the many educational efforts on the rise, all which call attention to the problem and propose solutions. A key component in the educational movement is also the promotion of alternative medicines, especially in the field of pain management, where opioids are most frequently prescribed. At the Circles of Caring conference on November 9th, the message from public social workers, health providers, addiction specialists and community activists was clear: patients should ask for alternatives wherever possible. Massage, physical therapy, tai chi, and even CBD oils, were a few of the suggested options.

Read this other article in La Voz, June 2016 edition, about the rise of heroine addiction in the Hudson Valley.
To find a center for drug treatment, call 1-877-846-7369, or search on the website of the Office of Alcoholism and Substance Abuse Services. busca en la página de la Oficina del Alcoholismo y la Drogadicción del estado de Nueva York.

*Translated into English by Anamaria Alvarez