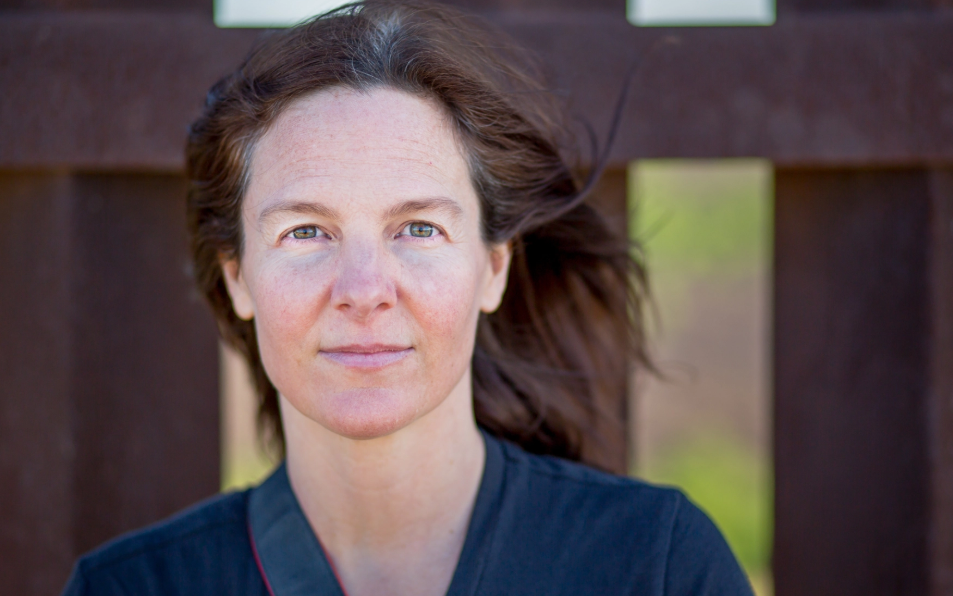 The border is much more than a wall

An interview with Krista Schlyer

March 2019
Krista Schlyer, photojournalist and environmental activist, has been working on the US México border for nearly two decades. Schlyer documents life along the border to show the ecological and cultural diversity of the area.
Her work forms a large part of the photography show, Continental Divide: Wildlife, People and the Wall, which will be on display at the Bard College Campus Center from March 10th through April 10th. Schlyer will join us from Washington DC to give a walking tour of the show on March 14th at 6pm. Her latest project, the documentary film ¡Ay Mariposa!, will be out later this spring.
Inés Chapela: For many Americans living far from the Southern United States, the border can be an imagined landscape, one that is largely crafted by the media and political discourse. What would you tell someone that has never been to this part of the world?
Krista Schlyer: I think one of the things that people don’t understand is just the uniqueness and the rarity of a lot of the landscape here. It’s really an unusual place because it is at a natural borderlands -- it’s the overlap of the temperate world and the tropical world, so you get this diversity here that’s a combination of northern and southern species. So you have jaguars and ocelots and jaguarundis which are tropical cats and then you also have the more northerly cats like cougars and bobcats and all these bird species. [This place has] the highest diversity of birds in the US, the highest diversity of butterflies. It’s just a really incredible place from an ecological standpoint. I think the same holds true for cultural value and diversity of this landscape because it’s this melding of the world of Mexico and the world of the US. So there are really interesting and unique communities that live down here.

IC: Can you explain some of the devastation of the border ecology that you have witnessed first hand?
KS: ...One of the problems is direct habitat loss, you can see that happening here in the lower Rio Grande Valley where there is less than 5% of the native habitat left, so it’s incredibly rare already, it's an endangered ecosystem. And what they do when they build a border wall is they come in and clear this rare landscape. So even more of this forest that’s an endangered ecosystem is being lost from that. You can see that happening as they build and right now they're starting wall construction here and the first thing they're doing is cutting down the forest of this national wildlife refuge.
That’s immediate but over the past decade there have also been studies done on species that have had their habitats fragmented. Like for instance bobcats, after the walls were built in South Texas in 2008 and 2009, they started seeing increased mortality in bobcats, because when you fragment habitat, especially animals like cats that need a pretty big range, they can no longer survive on these little fragments [of land]. So... they either end up getting in fights with other cats and one gets killed, or the one that’s the less dominant one will go searching for new territory. And what happens to a lot of them is that they [end up on roads and get killed].
…[so that’s one example, but there’s another big problem happening here in] South Texas. What’s happening is that they’re building the wall into the Rio Grande levee, the levee in different places is a mile to two miles away from the river. The border wall is not being built on the border, its being built a couple of miles inland. And most of the wildlife refuge, most of the native habitat that remains is in this area between the levee and the river ... Prior to wall construction, the levee was like a gentle slope that most animals could get over pretty easily but when they put the wall in, it becomes a vertical barrier that's 20 to 30 feet high. So the animals, not only can they not get over that just for normal migrations, but when floods happen (which they do here pretty frequently) the waters backup and animals drown in the flood waters because they cant get out over the levee. That happened in 2010, there was a big flood and there were flood waters in the national wildlife refuge behind the levee for weeks and in some cases even months. And when the flood waters receded, the fish and wildlife service went out and collected all these Texas Tortoiseshells, it’s an imperiled species, that had died because they drowned because they couldn't get over the levee and they assumed that was also true for a lot of other animals but most other animals don't have a shell that's going to be left behind afterwards, they would just decompose.

IC: You began studying journalism and worked for some time in Washington DC in the political circuit, but now you focus more on environmental photography. What inspired you towards photography and the border?
KS:  Immigration as an issue was on my radar because my masters thesis in my journalism degree was about the way that the press reported immigration issues and how the lack of reporting, or deeper reporting, on immigration was leading the public to believe something that wasn't actually accurate, which was that immigration and immigrants were a drain on the economy. It was not true but people believed it because the press had not been doing a great job at covering the deeper truths of what was happening in the country. So I was interested in immigration, and I started getting interested in border issues because of Defenders of Wildlife, but it wasn't really until 2007 when I started working on a story about a herd of bison that traveled back and forth between New Mexico and Chihuahua.
I went to do the story on the bison and  was with a scientist from Mexico City and we were up in a plane looking for the bison herd. We saw two males just as they were jumping over the border fence at the time which was a barbed wire fence that they could jump over whenever they wanted to. They had broken it down because their food and water resources were split by the border so they would go back and forth every day ... this was right when they were starting to build the border wall. And just in conversation with this scientist (who’s since become a good friend of mine), a lightbulb went off. I thought “Oh my gosh! These bison are going to have their food and water resources divided by a border wall, and if that's true for them, that's going to be true for every species that lives along this border.” So I just launched into a project to try and help people understand what I had just suddenly learned and understood.

IC: What advice would you give to people in the Hudson Valley in New York, how can they help?
KS: People there are actually in a pretty unique position to be able help for a couple of reasons, the primary one is that a lot of the funding that has been put to the border wall over the past decade really has been with the support of senator Chuck Schumer. He has voted for border wall funding every time that its come up since 2006 so one of the things people in NY can do is make a call to senator Schumer's office ((202) 224-6542) and tell him that you're not happy about funding border walls and militarization of the border because it’s bad for people, it's bad for the environment, it’s ineffective, and it's a waste of taxpayer dollars. So actually one of the reasons that we wanted to bring the exhibit there is that people of NY have a really great opportunity to try to help the borderlands.

The cover of the month

Photo of  Zulema Hernandez, taken by Krista Schlyer.
Zulema is: "A 77-year-old Mexican-American and former migrant farm worker. In August 2017, Zulema donned her leopard print blouse, gathered her walker and her daughter Juventina, and headed to a protest march in Mission, Texas. Her body pained by 40 years of farm labor, and leaning heavily on her walker, Zulema would march almost four miles in the Texas summer sun to stand in protest against the border wall with thousands of her borderlands neighbors. She walked and gave her quiet voice to the cause, and then rested. The next day she was out again, standing on the Rio Grande levee, fighting against the construction of wall on the Santa Ana National Wildlife Refuge–one of the most biologically important refuges in the nation. When asked why she was there Zulema replied: “If the wall is built, where will the butterflies go?”
back to top