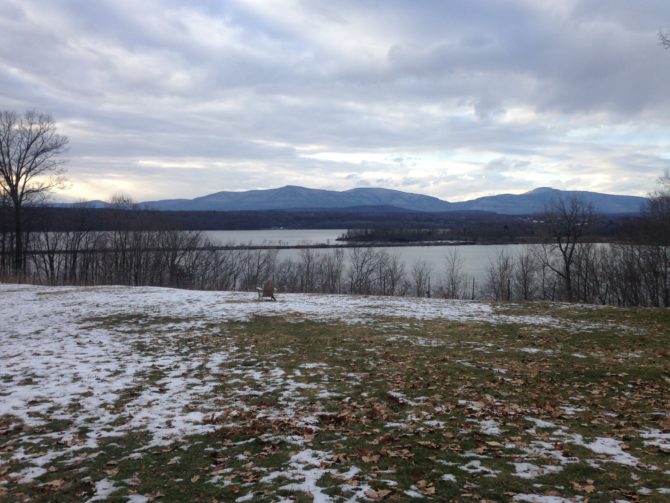 View of the Hudson River during the winter, photo by Natalie Schuman.

March 2017
I still see that girl and teenager who trembled with fear every time her dad came home drunk and hit her mom. I also remember that I would pray to God to take my father but not my mother. I thought that, if my mom died, I would not survive and, what would happen to my three siblings? From the domestic violence I saw every day, I grew up thinking that a woman was worthless. I have fought hard battles to overcome what I saw and learned as a child. Here, I learned to love myself and to see that women like me are so valuable, whether by being a model mom, a hard worker, a successful professional, a leader in her community, and more.
I arrived in this country 12 years ago, when I became a widow at 20. From the day I got here, my goal was to obtain my General Equivalency Diploma (GED), but I will never forget when I asked an English teacher how to go about it: “Oooooh, honey, you have a long way to go to the GED!” That comment made me think that I would never get my GED. On the other hand, the limited number of friends and relatives in my circle at the time told me that you can make good money cleaning houses, that working at a gas station is very easy, and that undocumented immigrants could not go to college in the United States. But witnessing my mother’s suffering was the weapon that allowed me to set goals for myself that people who discouraged me thought were virtually impossible.

In my first year in the country, I worked washing dishes in an Asian restaurant. I thought that, because I had no documents, it was acceptable for my nails to rot from working without gloves and that, because my English was limited, my coworker was allowed to say to me: “I’m gonna pum pum you with a pistola [gun]!”.
The following year, I had an accident while working at a Lebanese restaurant. Before taking me to the Peekskill Health Center, my boss made me promise him that I would not tell anyone that he was my employer. Half-conscious, I said: “Okay.” After the incident, he fired me.

Years later, I was working at a gas station for $6.50 an hour doing maintenance work such as sweeping fall leaves, painting, etc. Meanwhile, men would work the cash register. After three years and despite having a boss who kept pushing me down, I made it to an assistant position and got a raise. However, the treatment did not improve much.

During the recession, in 2009, a new owner, only 19 years old, arrived from Pakistan. From the moment he got here, he tried to lower my salary. One day, I was on the phone ordering supplies, and he said: “Liliana, what are you doing talking on the phone?” By then, I had been taking English classes at night two or three times per week and receiving self-esteem therapy once or twice per month.

These were my two weapons to confront my new boss. This time, I would not lock myself up in the bathroom to cry in silence. He told me: “If you don’t like my rules, you can leave. The doors are open.” That was one of the first times I was able to put my foot down with people who looked down on me. With a smile, I said: “Okay, no problem.”

Soon my savings dried up, I fell in a deep depression and ended up in the emergency room at the Valhalla hospital. Still, from those same experiences, I learned that I am worthy as a woman, as an employee and as a student, and I have not had a steady job since 2009 because I have clear boundaries about what it means to be treated fairly and what abuse in the workplace is.

I may have had many obstacles in life, but my main goal always was obtaining my GED and, some day, enrolling in college. With that goal in mind, I put all my hope for immigration reform on President Barack Obama between 2008 and 2012. In 2013, with no hope left, I started living my dream and my nightmare at the same time: After a number of attempts, I passed the GED in November 2013. By that time, I had already finished my first semester at Dutchess Community College. Receiving my first diploma in the U.S. was a dream come true. Although I did not qualify for the Deferred Action for Childhood Arrivals (DACA), the Deferred Action of Parents of Americans (DAPA) or for student loans, and only was allowed to apply for a limited number of scholarships, I was full of joy because my college education was finally beginning after having been postponed for so many years.

I was aware that this would bring me a number of financial challenges, but I never imagined that I would have to endure sexual harassment in order to ask for a loan. I had no choice: Either I remained quiet, or I suspended my studies. The same lack of money led me to eat junk food regularly, my car’s gas tank was usually on yellow, and I sold any gifts I received for Christmas or for my birthday to gather some money for school.

Part of these financial challenges had to do with having been denied a job as a Spanish tutor because I had no papers. That day, I remember thinking in English: “Drive off the bridge.” As I drove, I sobbed and kept screaming: “Why not! Why not!”

Two years later, the story repeated itself at the university in New Paltz. This time, I began isolating myself, and my perception was that I was being accepted as a student but that they were repressing my bilingual potential. As a result, I lost interest in participating in student clubs and volunteered less than when I was at Dutchess. I worked more at a gas station on weekends.

After so much sacrifice, and thanks to some professors and extraordinary female friends, I survived the emotional and financial burden of those four years. On Dec. 20, 2016, I completed by B.A. in Spanish with a second major in English, and my diploma is on its way. I fulfilled one of my most cherished dreams. Today, the challenge to become a professional awaits me. The testimony of my struggle is only one in millions.

Translated into English by K. Casiano from Voices of New York, https://voicesofny.org/2017/03/an-immigrant-womans-testimony/back to top