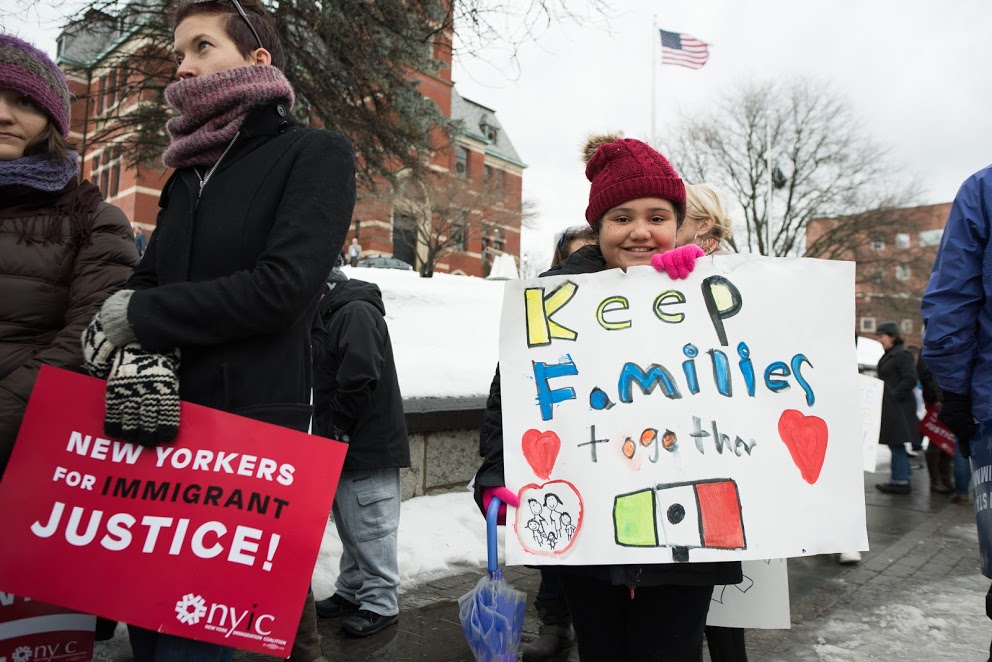 Sanctuary Movements in the Hudson Valley

February 2017
Since the election of our new president Donald Trump, the movement to create sanctuary spaces for undocumented immigrants has gained new momentum all over the U.S. Both the racist rhetoric of the campaign of Trump and his most recent executive actions degrade and put millions of people at risk.

In response, residents of cities and university campuses have protested in the past few months to advocate for “sanctuaries.” Many of these demonstrations were organized by groups like The Movimiento Cosecha, which advocates for the civil rights of undocumented immigrants.

But what does “sanctuary” mean? The term was used for the first time in the 1980s, when more than 500 churches pledged to protect undocumented immigrants that arrived as refugees seeking asylum from the political crisis in Central America. The churches offered physical shelter from immigration police, ICE. Today the term carries a more specific meaning: in sanctuary cities, the local police is in charge of enforcing local laws, and they leave the enforcement of federal laws to the federal government. It is a policy of noncooperation in the deportation of immigrants. When ICE requests that the local police detain someone without a judicial warrant until immigration agents arrive, this detention is illegal because of its violation of the 4th amendment of the U.S. Constitution. It is important to the local police that the immigrant community is not scared of coming into contact with the police. This fear would erode the trust that is necessary to ensure that crimes are reported and that people cooperate with investigations.

According to the Immigrant Resource Center, there are currently 364 sanctuary counties and 39 sanctuary cities in the whole country. Some of these states, like California, Connecticut, Rhode Island and Vermont request that their local police limit cooperation with federal requests to arrest immigrants. In November, New York State Governor Andrew Cuomo announced a public/private emergency legal defense fund to protect the rights of immigrants. However, in regards to the local police in New York State, every county and city can decide whether they will cooperate with immigration or not.

In the Hudson Valley, cities like Hudson and Beacon are considering becoming sanctuary cities. In other towns like Saugerties and New Paltz, while noncooperation is not legally explicit, the police is not in the habit of providing information about minor infraction arrests to ICE. It is worth mentioning, though, that the majority of immigration arrests occur through county jails, which in our area claim that they do cooperate with ICE.

Meanwhile, the City of Kingston just declared itself a sanctuary city.

After a 3-hour-long public hearing featuring the testimonies of more than 60 people before a crowd of almost 400 people, the City of Kingston passed a resolution on Tuesday, January 10th declaring the city “welcoming and inclusive” to immigrants, regardless of their legal status. This resolution put into writing the Kingston Police’s decade-old practice of not inquiring about migrant status and generally not cooperating with ICE.

A Uruguayan immigrant, Sergio Gastón Robaina was in attendance on January 10th and said the following about the public hearing: “It was gross in the beginning to see such hate from the angry supporters of Trump,” of which there were about 15 who gave their testimony at the beginning of the hearing, “but afterwards it was moving to see hoards of Kingstonians, who were born in the United States, speaking and fiercely defending the immigrant community. A million thanks to the city council members Reynolds Scott-Childress, Lynn Eckhart, Nina Dawson, William Carey, and Steven Schabot, to our incredible mayor Steve Noble, and to the 20 members of the clergy that started all of this. After the resolution was passed, I saw families crying and hugging each other, they were happy to feel protected, and a little bit less scared in these times of extreme hostility against minorities.”

The beginning of this happy ending for the City of Kingston happened thanks to the tireless work of the community. This success is due in part to a letter that was written in November of 2016 by Reverend Frank Alagna (of the Church of the Holy Cross, member of the Church Board of Kingston and of the Ministers’ Alliance of Ulster County) and signed by 21 religious ministers from the area. The letter urged Mayor Noble to declare Kingston a sanctuary city, due to the fear generated in the immigrant population since the election of Trump. Noble responded by asking the City Council to consider passing a memorializing sanctuary resolution.

Additionally, there was a meeting among Noble and Kingston’s Chief of Police Edigio Tinti, with members of the local coalition Mano-a-Mano that were exhorting elected officials to make a firm commitment to those most vulnerable members of our community. Tinti said “we treat everyone equally, regardless of migratory status or possession of a driver’s license. We treat people with respect. My family came from Italy and they always told me: if you behave well, you are rewarded; if you behave poorly, you are punished. For victims of crimes, what’s most important to us is justice, not migrant status.” That day, Tinti and Noble promised to show their support publicly.

That is how, on Sunday the 18th of December, International Migrants Day, the police chief and the mayor of Kingston participated together with 200 other people in a march in support of immigrants (who were pleasantly surprised by the gesture). See this month's cover of La Voz for a photo by Jodiah Jacobs of the event.

This is just the beginning

One of Trump’s executive orders from his first week in power announced that he would eliminate federal funds to towns and cities designated as “sanctuary.” Neither slow nor apathetic in his response, the Attorney General of New York Eric T. Schneiderman responded with the following statement: “The President lacks the constitutional authority to cut off funding to states and cities simply because they have lawfully acted to protect immigrant families -- as described in the legal guidance my office issued last week. Local governments seeking to protect their immigrant communities from federal overreach have every right to do so. Any attempt to bully local governments into abandoning policies that have proven to keep our cities safe is not only unconstitutional, but threatens the safety of our citizens. I urge President Trump to revoke this Executive Order right away. If he does not, I will do everything in my power to fight it,” implying that he would bring it to trial if necessary.

At the local level, new groups have emerged to combat Trump’s attacks on immigrants. Community groups like the Columbia County Sanctuary Movement, Hudson Valley Hate Free Zone and Stand Up Against Racism, among others, have joined the fight with other already established groups like Hudson Valley Community Coalition and Community Voices Heard.

For cities in the U.S., the choice to defend their immigrants is more than an ethical decision. The economic consequences of losing this part of their community could be catastrophic. Undocumented workers do the work that no one else wants to do, for a salary that keep low prices for consumers. This model has survived for so many years in the U.S. (since the years of slavery) that the economic system would surely collapse if the undocumented workers were deported.

Trump has promised to revoke DACA, a policy decreed by President Obama to protect undocumented children. An estimated 30% of college students in their freshman year are the first generation of their family to attend college, and many of them are children of immigrants. Universities are in a unique position to defend the human rights of their undocumented students, to empower them with academic opportunities and to demonstrate how they can serve the country as educated citizens.

The question remains as to what a “sanctuary campus” is. There are more than 100 universities that have promised to protect their students from deportation and from xenophobia and racism on their campuses. Additionally, universities may take measures to ensure their affordability. Bard College, for example, has initiated a sanctuary fund to provide scholarships for undocumented students (if you would like to make a donation, click here: http://tinyurl.com/BardSanctuaryFund). On the other hand, universities are not required to ask for information about the migrant status of their students. Bard College has also changed its policy of admission so that undocumented students do not have to fill out their application as international students.

Brenda Palma, a student at Dutchess Community College (part of the SUNY system, declared itself a sanctuary) spoke of immigrant students’ fear of deportation: “It could be that they don’t deport a single student but what is very clear is that there is more discrimination against immigrants. I also imagine that the laws pertaining to immigrants will be severe or basically ensure that they are more enslaved than they already are.”

*Originally published in Spanish, written by Mariel Fiori and Isabel Vázquez
*Translated into English by Natalie Schumanback to top