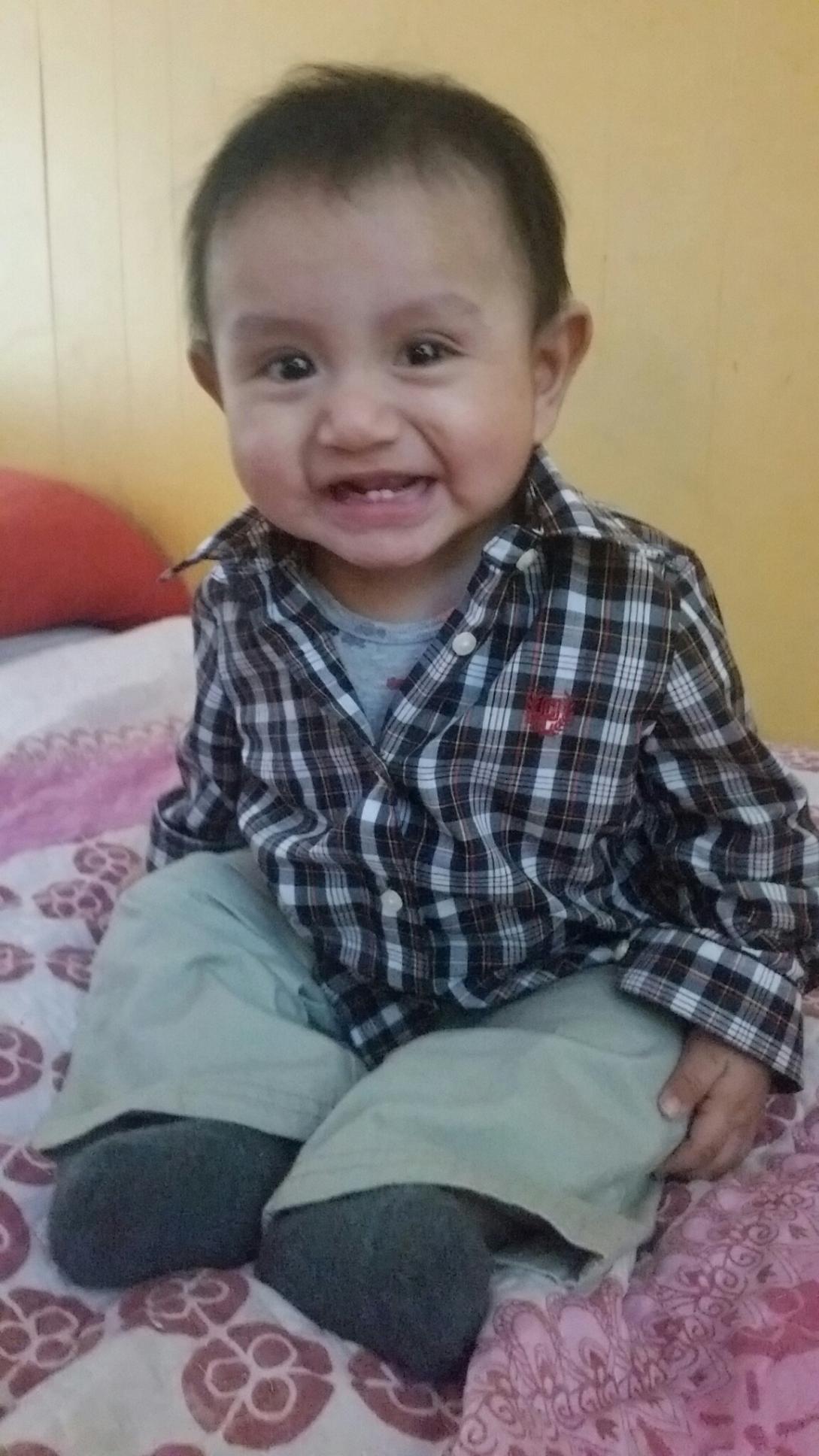 Lydia's baby seems to be saying: "I want to see my mommy more!". Photo by Leanne Tory-Murphy

March 2016
Lydia is a 23- year old mother of three living in Kingston. She works 20-25 hours/week as a Personal Care Assistant at an agency that provides in-home care to seniors.  Lydia’s youngest child was born 8 months ago.  At $11/hour Lydia was not able to afford the optional health insurance her employer offered which would have cost her more than what she was making. Fortunately she was eligible for Medicaid.
It was Lydia’s first time working during a pregnancy and her employer told her she could take a six-week unpaid leave after giving birth.  Lydia knew that she could apply for New York State Temporary Disability Insurance, which provides weekly cash benefits to partially replace wages lost due to injuries and illnesses unrelated to work.  Because of her part time status, Lydia says she “decided not to apply for it.  It wasn’t even worth it…” because of the very low payments she would receive.

Parental leave…for those who can afford it…

For most working women in New York, Temporary Disability Insurance is the only option for paid maternity leave.  The vast majority of employers do not provide paid parental leave and nationally only 13% of workers are covered.  According to a March 2014 National Compensation Survey of private industry workers, only 5% of workers in the lowest wage quartile have employer-provided family leave, compared to 22% of workers in the top quartile.

The Family Medical Leave Act (FMLA) provides unpaid leave of up to 12 weeks but only covers workplaces with more than 50 employees.  Because it is an unpaid leave, it is only viable for those who have sufficient savings or adequate income from a partner and does not address the economic issues faced by many low-wage workers.

The numbers of workers with access to employer-provided family leave are low across the board but women in low-wage jobs are hit the hardest.  Among low-income mothers in New York City surveyed in 2014 by the Community Service Society, an anti-poverty organization, nearly half said they have less than $500 in savings and over a quarter had no savings at all.  In the absence of savings and appropriate family leave benefits, these women return to work very soon, sometimes only a week or two, after giving birth.  Complications can quickly arise around childcare, breastfeeding and sleep schedules and many parents describe the difficulty in having to choose between bonding with their newborn and being able to provide for their families.

Although Lydia believes that having 6 months with a newborn would be ideal, she returned to work after 6 weeks of unpaid leave because her family needed the income.  Lydia says that she would have wanted to spend more time with her newborn, “I had my sister watch my baby, but still, you want to be there when they are little.  You get to know them more and they get to know you more.”  The process of bonding with the baby through touch, rocking, feeding and making eye contact can take time and forms a strong connection between parent and child, and a sense of security in the baby.  When parents return to work soon after childbirth this process can be disrupted.

Jessica Able works with Healthy Families, a home visiting program that supports families before and after the birth of a child.  She says that leave is essential for breastfeeding, allowing the mother’s body to heal, reducing post-partum depression and allowing for bonding to take place. Additionally, “this bonding and nurturing decreases the likelihood of child abuse and neglect as well. Add the proven benefits to the brain and immune system of a breastfed baby and it is really clear how important this is for a child.  It sounds drastic but this experience for the mother and baby is real and needs to be protected…Mothers and babies need to be allowed to have that time to actually be successful. Otherwise I compare it to an unfunded mandate.”

Breast is best…but not if you’re working…

After one month of breast-feeding, Lydia’s son still wasn’t latching properly, possibly due to something she was eating, the Doctor told her.  But because Lydia had to return to work, and taking breaks to pump breastmilk would have been incredibly challenging, she transitioned over to formula.  “If I had more time with him I probably would have breastfed more,” she says.

The American Academy of Pediatrics recommends that babies be exclusively breastfed for the first 6 months of life, and then upwards of a year in conjunction with solid foods.  They report that babies who are breastfed are less likely to get infections and diseases, and that the hormones that are generated through breastfeeding have positive health benefits for the mother.

Infants will breastfeed upwards of 10 times per 24 hours in the first month and approximately every four hours in the following months. Although most workplaces are required to provide breaks and a private space for new mothers to pump, employees who are fearful of losing work or whose jobs are not easily adapted to that break schedule may not want to advocate for their right to pump at work.

Wouldn’t it be great for mothers to not have to make these types of decisions?

Family Leave Around the World

The United States is one of only a handful of countries that do not provide guaranteed paid family leave to new mothers.  Among industrialized nations the U.S. is alone.

Throughout Latin America, paid leave is guaranteed to all working moms.  In Mexico, Argentina, Bolivia, the Dominican Republic, El Salvador, Guatemala, Nicaragua and Paraguay new mothers can take 12 weeks at full pay. And in Cuba, Venezuela and Brazil paid family leave is even longer.

It certainly says something about American “family values” that childbirth and motherhood is valued so little.

A Time for Change

As we delve into this Presidential election cycle, paid family leave has come up again and again.

In a recent speech in South Carolina, Democratic Presidential candidate Bernie Sander’s describes how women with enough savings can take weeks or months off when their child is born, “but if that mom does not have sufficient income…that baby is separated from mom at 5 days or 10 days so that mom can go back to work.  That is wrong! It is not a family value!”

Sanders is a co-sponsor of the FAMILY Act, which would provide up to 12 weeks off at partial pay for working mothers and fathers.  The law would also cover other types of leave if someone needed to care for a sick relative or to recover from a serious illness. The benefit would be paid for by a deduction of about $1/week from all paychecks.

His Democratic contender Hillary Clinton also supports 12 weeks of paid leave but believes it should be funded through a tax on the wealthy.

When asked if the weekly deduction would be worth it, Lydia says, “It’s a dollar, its not gonna hurt a lot.  I would say it would be a really nice thing.”