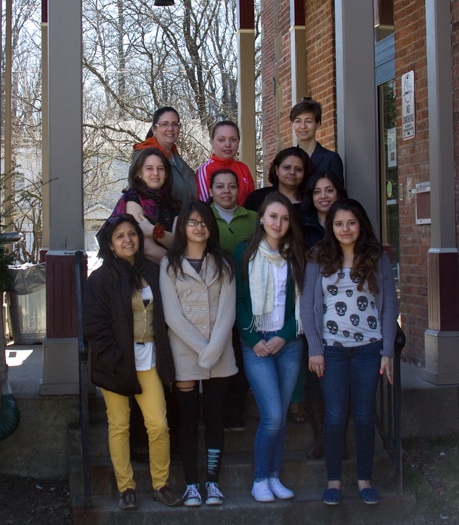 April 2013
On a typical Saturday, a group of women come together to one of their homes. They sit in a circle, have some coffee with sweets and begin discussing love, pleasure, and desire, as well as war, violence, suffering, and solitude. These are themes that are present in our everyday lives throughout the world, but the space, time, and opportunity needed to contemplate these topics and introduce them into the public consciousness doesn’t always exist.
Truthfully speaking, this is not just any typical conversation, but one of the first rehearsals in a production of the Vagina Monologues, a work by Eve Ensler. It is a play that creates a space to publicly discuss issues that are frequently surrounded with silence. Ensler – an American author and activist – wrote and presented The Vagina Monologues for the first time in 1994. The intention behind her work is to use art to confront themes that are frequently kept under wraps or that, for many people, prove too awkward to publicly discuss – themes such as the body, sexuality, and violence against women. The work, now translated in 48 different languages, is known as part of a global campaign to “cease violence against women,” http://www.vday.org/es/about. Under the name of V-Day, the campaign/organization promotes the staging of The Vagina Monologues through volunteer and student groups with the purpose to entertain and bring about awareness, and at the same time gather funds for organizations that combat abuse against women and promote well-being.

Among the organizations that have promoted the well-being of Latino immigrants in the Hudson Valley is the group Somos la Llave del Futuro (We Are the Key to the Future) http://somoslallave.org/. This will be the second year that the board of directors of the SLF organizes a production of The Vagina Monologues. In 2012 a production in Spanish was held in Poughkeepsie and was very well-received. This year, Maria Jimena Concha and Mariel Fiori, who performed in the play last year, formed another group to stage the work afresh. This time, with the support of Hermanos Unidos and Latinos Unidos, the play will be held in Newburgh and Kingston on the 13th and 20th of April, respectively.

Although the play is directed by Concha and Fiori, the creative process includes much collaboration with the actresses. The play features twelve women who are not professional actresses and come from diverse communities and experiences – they work in restaurants, homes, factories, security, and more; some of them are also students. They form a complete rainbow, including women from the U.S. and Puerto Rico, the Dominican Republic, Colombia, Costa Rica Spain, and Mexico (Puebla, Oaxaca, and DF).

What most pleases Laura Garcia, a young participant who studies at Dutchess Community College, is “the opportunity to unite as women. We each have different experiences but we unite under the same goal.” Each of the women brings to the creative process their own share of experiences and a dynamic feel that transforms the space – they take risks, they critique and feed off of each other, and not infrequently do they bring each other on the verge of tears from sheer laughter. Mercedes Torres describes it as a therapeutic space. Others, like Rocío Balbuena from Newburgh, share this sentiment both about the creative process and the play itself. “The play,” says Rocío, “speaks about the reality that sometimes, as a woman, is unpleasant to talk about… but we need to get it out.”

The women, through only a couple of rehearsals, are now more confident as a group and have a stronger sense of self-assurance. Katia Perez, a quinceñera from Red Hook, one of the youngest actresses in the production, says she joined in order to learn how to talk publicly with ease. She said in English, “I want to get over my stage fright.” Her friend, Brenda Palma, another young member of the group, also reflected on her desire to conquer her performance anxiety. She says that the most difficult part is “getting nervous and talking too fast.”

It is very exciting to observe the process – e.ach actress develops a singular voice and, at the same time, their role within the play. Adriana Palma Hernandez says that her favorite part until today has been how each person “brings something uniquely essential to her role.” Adriana also appreciates the sisterhood that has formed among the participants, an opinion shared by Inma Donaire, who recently arrived to Rhinebeck from Spain and is content in a group where she has the opportunity to unfold and share her voice.

The participants have been drawn to the production in different ways. Jenny Hernandez, for example, thought that her friend, Laura, had invited her to see the play, until she came and was offered a role! Despite her unexpected involvement, she remains excited – as a girl growing up in Costa Rica, she says she had always loved acting and that the play allowed her to “relive moments from her childhood.” Jenny also spoke of the value of art and the knowledge that anyone can partake in it.

The women are doubtlessly enjoying their involvement in the play, but they also acknowledge the work and commitment needed to participate. It is an overwhelming commitment, as Laura Elena Labastida said: “the hardest part is time – you have to set apart time even when you have none left.” The commitment is by no means a small one, especially because the actresses have to balance a multitude of obligations: work, family, and in many cases, more than one job.

Eve Ensler wrote The Vagina Monologues based on more than 200 interviews of women held in the nineties. The play has inspired many people, but, like everything else, is not without its flaws. Authors and activists such as Tara Williamson, Clara Eugenia Rojas, and Christine M. Cooper, among others, have asked if a single work can truly represent the lives and interests of women from different cultures and geographic regions. What is lost in removing a brief monologue from its context? What is lost in translation? What tools exist to represent the experiences of women within its particular confines? The question also arises of whether the play succumbs to the trap of reducing women to a single part of their anatomy. Lastly, persons, such as Kim Q. Hall, professor of philosophy, who proposes that it is necessary that V-Day confronts the realities of disabled bodies and bodies that do not conform to the conventions of what is regarded as biologically female. These are not questions that paralyze the movement; on the contrary, they challenge the V-Day campaign to imagine a global movement that allows itself to be integrated and changed by the diverse experiences of the people.

In the communities of the Hudson Valley we face our own challenges when it comes to the well-being of the Latino communities. Acts of violence – both small and severe – are lived through in ordinary lives and include both familial acts of violence and violence within our own community. They also include discrimination, violation of our rights as humans and laborers, and the lack of access to basic resources, decent jobs, and medical and financial institutions. SLF are among the regional organizations that dedicate themselves to guide Latinos in this region and the production of the Vagina Monologues does not only seek to entertain the Latino public, but also to gather funding to finance services for the communities in the Hudson Valley.

*Light Carruyo is a professor of Sociology at Vassar College

*Hannah Blume collaborated in the preparation of this article