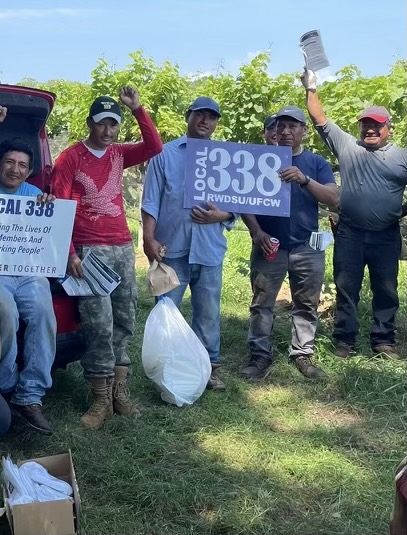 Victory in the Fields

November 2021 History was made for New York farmworkers. For the first time, New York State agricultural workers are officially represented by a labor union. On September 27, the Public Employees Relations Board (PERB) certified Local 338 RWDSU/UFCW as the representative for fourteen workers on the Long Island-based Pindar Vineyards.
“We don't lose anything by trying," Rodolfo Mendez, a farmworker at Pindar Vineyards said. Mendez, who started working at Pindar in January 2021, quickly took on a leadership role, and raised awareness about farmworker rights, also sharing his experience with others interested in unionizing. Mendez has been working on vineyards in Long Island for the past five years.

In an unprecedented effort, three union locals are organizing farmworkers across the state, with support from the United Food and Commercial Workers International Union and the Retail, Wholesale and Department Store Union —RWDSU/UFCW 338, UFCW 888, and UFCW One. All of these entities supported the two-decade long fight for the passage of the 2019 Farm Laborers Fair Labor Practices Act (FLFPA). The FLFPA, which provides important rights to farmworkers, is now being tested.

“In the beginning we had a lot of fear. But after we talked with one another, it was time. The time to stand up, the time to take the veil off our eyes, to make sure we feel we deserve our rights as farmworkers,” said Jorge Ramírez, a Pindar worker for the past 18 years.

The FLFPA took effect on January 1, 2020, only a few months before the pandemic hit, making the already challenging task of union organizing even more difficult — particularly among workers who fear retaliation in the form of eviction, job termination or deportation. Organizing obstacles abound, including workers who often do not know their exact locations or even their home addresses, making it difficult for organizers to find them.

Pindar workers expressed frustration that they weren’t being given the same respect as other employees of the winery. The workers who joined the union explained that they were understaffed, overworked and ignored by their employer.

Rodolfo believes the reason why he and his co-workers are treated differently is a product of racism. The Pindar workers are originally from Guatemala and Honduras. They are now New Yorkers after having lived and worked on Long Island for numerous years.

The 14 Pindar workers are now entering contract negotiations with their employer, who has otherwise remained silent during this entire process. There are timelines for negotiations and if the employer and workers cannot agree on contract terms, the law requires mediation and then arbitration to be sure a contract is finalized.

Pindar joining Local 388 RWDSU/UFCW is the start of a wave of labor successes for New York State farmworkers. The effects of this momentous decision have already been felt: on October 17, farmworkers from across New York state gathered in Riverhead, NY to discuss their rights and how to organize. This was the first meeting of its kind.

Workers on Pindar expressed gratitude for the unions and their organizers’ efforts.

“We are very thankful to the union organizers for their help and for believing in us,” said Rodolfo.

Rodolfo is encouraging other farmworkers to also join unions. “We’re opening the door for others,” he said, “It’s time for all of us to wake up.”