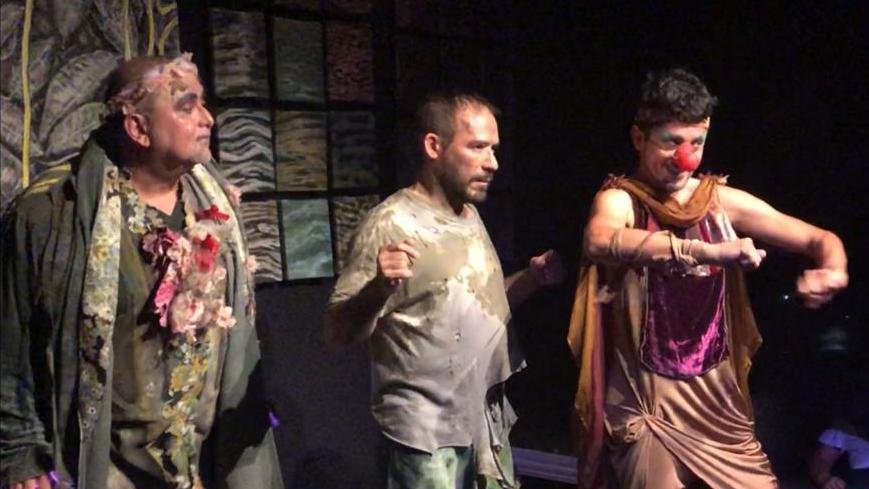 October 2019 La Voz magazine and iD Studio theatre present Cumbia de mi Corazón, a Spanish-language play with English subtitles coming to the Hudson Valley Oct. 18-20 in Kingston, Bard College, and Poughkeepsie respectively. Written by Toby Campion and directed by Germán Jaramillo. Toby, resident of Red Hook, speaks to us about why this play had to happen, and what it means to us, as human beings, to think of the great beyond.
Nohan Meza: What is Cumbia de mi Corazón about?
Toby Campion: The recurring theme is this: Where one puts their heart, there goes their life. So this man, Heriberto, finds himself in the great beyond. He’s a very stubborn man, hard-headed, and says that without his wife he’s not going anywhere. His wife hasn’t died yet, she’s still with us. So the play begins the day the wife, Maruca, dies. But when she gets there, she doesn’t recognize him due to the Alzheimer’s she suffered in life. And he’s been waiting for 50 years! So he dedicates himself to rescuing the heart and mind of the woman that was his wife, and the only way of doing it, is through music. After writing the play, lots of people wrote to me saying that the section of the brain that recognizes music is not affected as strongly by Alzheimer’s and they can remember their good times through music. Now they use that as therapy. I wasn’t aware of this when writing.

NM: Why do you believe music endures when the rest is forgotten?
TC: Music puts us in contact with the invisible world. Music leads us, through the melody, the notes, the rhythm, to a sublime sensation. And it’s not music by Beethoven or by Mozart, it’s popular music. The ones who created this were able to communicate the best of human life without using words, but instead using the pure rhythm and the movement it induces in all of us. Then, when I studied cumbia, I discovered it was a mixture of three cultures. The drum is the base, which is actually African. The millo flute they play is native to the indigenous people off the Caribbean coast of Colombia. And the verse, that’s Spanish. These three threads they wove into something new, what we call cumbia. And listening to that music well . . .  I began getting ideas.

NM: Do you think art allows us to access that sublime space between the real and the ephemeral?
TC: Art is the bridge that connects us to this other world that surrounds us. We can’t hear it, but it’s always there. It’s merely a matter of tuning in. ‘Cause at the end of the day it’s the same world, and I won’t reveal the end of the play, but he has to realize where he truly is, and accept that he has always been there. While writing the play I had a dream. My father showed up, even though he’s been dead for a while, and tells me, “I’m going to show you something,” but he had a gray color to him, and around us there was a lot of people the looked normal, the color we see. “Us who have the gray color, we are all dead. The rest is like you, living in your world and your time, but we are all in the same place, we just don’t see each other.” So I watched the gray people passing by, going to their jobs with their suitcases, passing by the living people, who were none the wiser. This led me to understand that it’s one world. A Venezuelan teacher of mine who was called Josué Manuel Estrada once said, “Why wait for death if everything you have to discover there you can find here right now.“

NM: Do you think that telling this story through fantasy allows you to say more than through a realist lens?
TC: I don’t have the academic capacity to speak and philosophize about these subjects. I write what I feel, what comes from the heart. This limits me in some ways because I can’t just dive into deep subjects in a linear and direct manner. I have to do it my own way. But one thing happens with theatre: if the play doesn’t entertain, forget about philosophy and what you want to say. If it doesn’t entertain, you have nothing. The good thing about theatre, which is different from cinema, is that you’re there, with people made of flesh and bone living whatever they’re projecting at that moment.