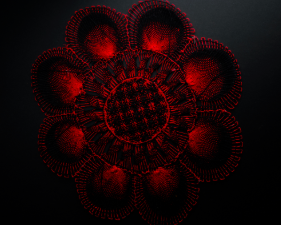 July 2019 What follows is the mythical origin of our traditional sowing method called Ñandutí. I never really read the legend itself, rather heard it during my childhood in Paraguay and, in a certain way, it never left me. I penned it for the first time for a fairy-tale magazine called Enchanted Conversation, and now I'm writing it again in Spanish for La Voz. You could call it a translation or a retelling, but to me, it's simply a part of those stories from olden times that stay among us, waiting for a trip down memory lane in order to breathe life anew into them.
It is unclear whether Samimbí ever loved either of them, or any of the other suitors for that matter, but knowing the way of things, she gave instructions of how one of the two brave warriors was to win her favor. Of course, she admired both of them for their respective qualities: Ñanduguasu, Brave-Ostrich, was a swift and fearless warrior known for his speed, which is why he had been given that name by their shaman. And Jasyñemoñare, Son-of-Moon, was known as one of the most handsome men in the village; it is said he was blessed by the gods. Both courted her with poetry, songs, and dance in an attempt to win her hand, for she was the chieftain’s daughter, and so beautiful and kind that light itself, whether by day or night, always shone upon her face. Still, these were not the things that mattered to Samimbí. She longed for something different, something that would be unique among her people.

He hugged and kissed his mother a hundred times, then laid her to rest and ran to Samimbí’s home with the gift, giving honor to his namesake. Seeing the beauty and complexity of the arrangement, Samimbí knew this to be the most beautiful thing in the forest, and agreed to marry him. The whole village marveled at such godly cloth, the likes of which they had never seen before. Unable to deny her village such beauty, Samimbí allowed the women to copy the technique of Ñanduguasu’s mother—who never told what she had learned of Jasyñemoñare’s fate—so she would live on in their collective memory. The method of weaving they called Ñandutí, hair-of-spider, and made it the crowning achievement of their people. Then all sang under the sun, and later danced under the moonlight, too.