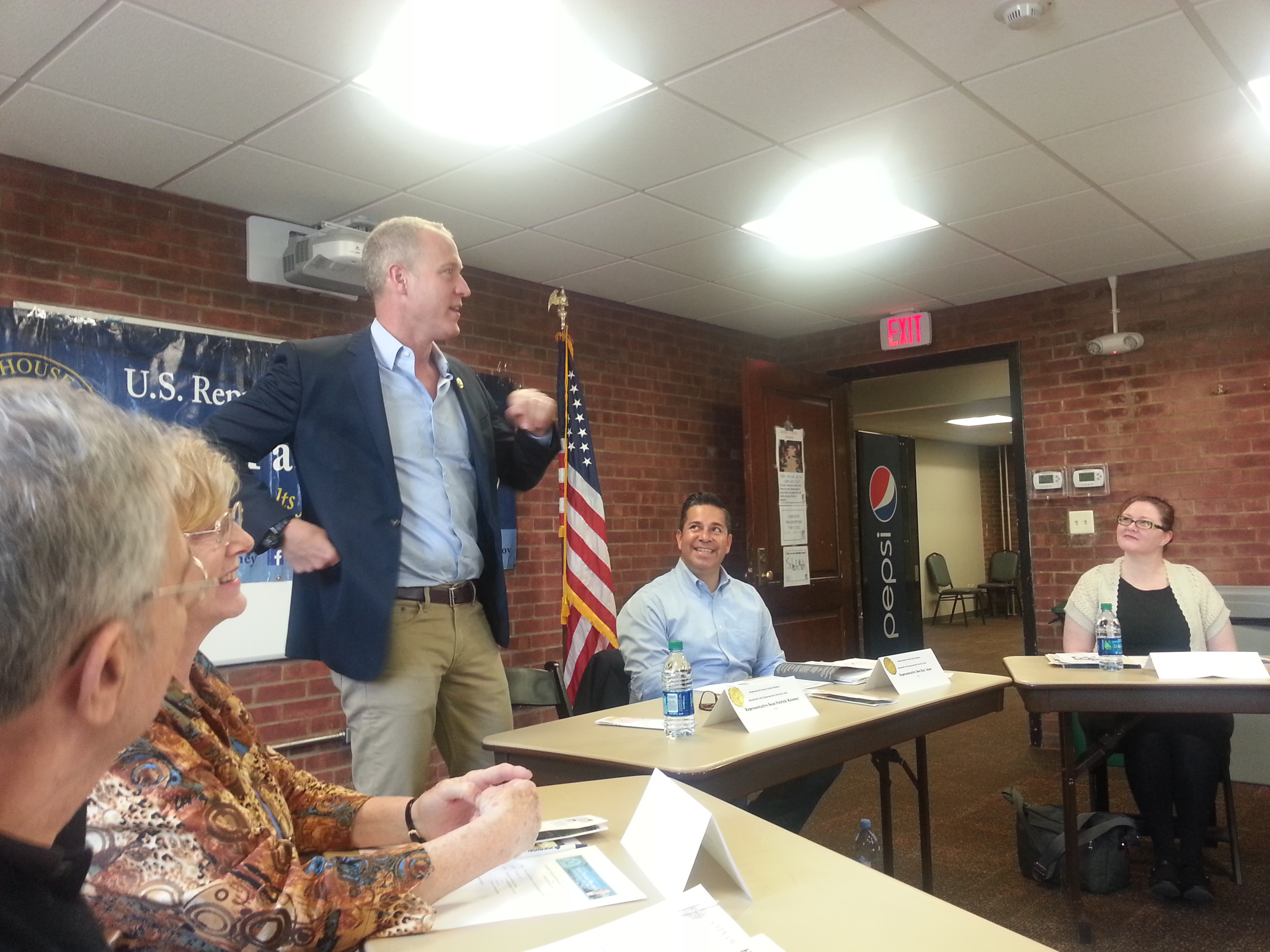 Hold on to whatever you can

May 2016 With the intention of understanding the needs of the Latino community in the Hudson Valley, on Saturday the 23rd of April, congressmen Sean Patrick Maloney (district 18, that is, Orange, Putnam, parts of southern Dutchess and northeastern Westchester counties, including the cities of Newburgh, Beacon, and Poughkeepsie) and Ben Ray Luján (of New Mexico and Chair of the Democratic Congressional Campaign Committee) sat down at a round table in the Armory of Newburgh, NY.
The two congressmen, without ties and in light blue shirts with their sleeves rolled up, showed off a little of their Spanish (Luján speaks it perfectly, although he apologized to me for his Spanglish, and Maloney did pretty well since he lived in Perú for a year) and let us talk for 45 minutes. And we went one by one. At the round table, brought together by Maloney’s Newburg office, we represented a diverse community of service organizations, such as: Karen Eberle-McCarthy of Latinos Unidos of the Hudson Valley, Inc.; William Kaplan of the Newburgh Armory Unity Center; myself; Laura García of the Orange YWCA; Ignacio Acevedo, Luz Cid and Alfredo Pacheco of Community Voices Heard; Karen Mejía, council woman for the city of Newburgh; Cynthia Marsh-Croll, of WEDC Poughkeepsie; Kim Kochen of United Way; Gabriela Owen, from the Dutchess Department of Behavioral and Community Health (formerly the Department of Health); Diahan Schott and Leslie Retamozo of the Newburgh center of family health; Annette Marzan of Planned Parenthood Mid-Hudson Valley; Christine Rolando of Orange Literacy; Ivette O’Sullivan of Opening Doors; and Danielle Lowe of Baby Steps, Inc. The truth is I couldn’t figure out who was really invited and who showed up last minute.

But when the stakeholders began talking I wasn’t sure if I was in the right meeting. Is this the meeting with members and leaders of the Latino community to discuss our needs? Or is this a meeting with agencies and social services that target Hispanic people or at least count them as clients? Did we come here to talk about all the good we do or are we here to shed light on the issues? Well, a great portion of the short time we had available to us was spent in admiring all of the excellent literacy, sports, health, and other programs that are offered in Newburgh.

Luckily, Ignacio Acevedo and his team reminded us that they came here because they continue campaigning so that undocumented immigrants can get drivers licenses in the state of New York (something that isn’t decided at the federal level, but is an urgent necessity). Then everything picked up where it left off. Maloney said he had worked with Acevedo on the campaign for a minimum wage of $15 an hour, which was recently passed in our state; while Owen asked if he was satisfied with the level of Hispanic professionals and businesses participating in the federal government. This has to do with the fact that, by law, governments are supposed to enter contracts and employ minorities at a level of at least 20 percent. The congressmen said that they were going to look into how well the law is being followed. Mejía said that the fee for becoming a naturalized citizen is an expense that a lot of legal permanent residents can’t afford, and that comprehensive immigration reform is our priority. Yes, Maloney responded, comprehensive immigration reform is what we want, and that’s why the Supreme Court decision is so important.

I almost felt like I had just wasted a beautiful, sunny Saturday afternoon with family, when suddenly people began discussing more concrete things, things that we, the Hispanic people here, with or without papers, working at a for profit, nonprofit organizations or independently, could do. It was when Christina Martínez shared her story. This young woman of Mexican descent found one day that both her parents were being arrested and put in the deportation process. Without wasting any time, and using all that she had learned through her years of work with the Rural Migrant Ministry, she knocked on every door until she found congressman Maloney, who helped her. And thanks to that contact Martinez became an intern in Maloney’s Newburgh office, and today is employed as his personal assistant.

Both congressmen emphasized the need for us to go to their offices, to use democracy as it should be used, because after all that’s what they’re being paid for. Although some people took this offer lightly, and others like it was sarcasm, I think we need to hold on to whatever we can. If our representatives say they’ll open the door, let’s go there, make ourselves heard, and be a part of the process of change that we so badly want. Congressman Luján said that that’s how he got started, as a summer intern in the district’s office that he now represents.