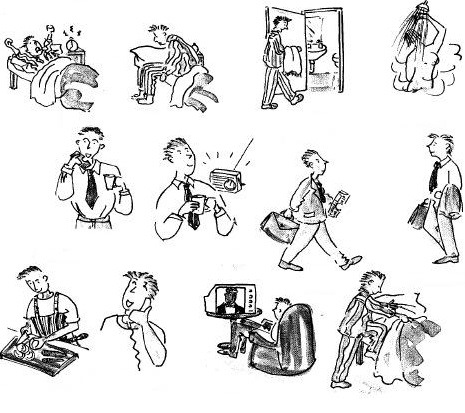 What do you do everyday? / ¿Qué haces todos los días?

October 2014
We use the present simple to talk about:

•    Something that is always true or usually true. You speak two languages.

•    A habit or routine. We always have lunch here.

When it comes to habits, routines or traditions, we use time expressions. They are called adverbs of frequency and they show how often something happens.

I always have baseball on Fridays.

We are normally tired after work.

Other time phrases are:
ONCE
TWICE
THREE TIMES a day/week

She goes down to NYC every weekend.

He likes fishing. She plays tennis. It eats a lot.

If the verb ends by consonant + -y, the ending changes into -ies with he/she/it. For example: study > studies: He studies at Bard.

- pass > passes: The dog passes through the little door.

- fix > fixes: She fixes everything in the house.

What does Juan do every day?

Write Juan's daily routine. Do not forget to include adverbs of frequency or time phrases. You can also write the time (at 8 am, at 1 pm...) or moment of the day (in the morning, in the afternoon, in the evening, at night).

Answer Key:  Juan wakes up very early every morning and he gets up 5 minutes later. He goes straight to the toilet and he takes a shower. Then, he has breakfast while he listens to the radio. He goes to work at 8 am and he finishes at 6 pm. He walks home and he cooks around 7 pm. In the evening, he calls his friends and he wacthes tv. He goes to sleep at 11 pm.