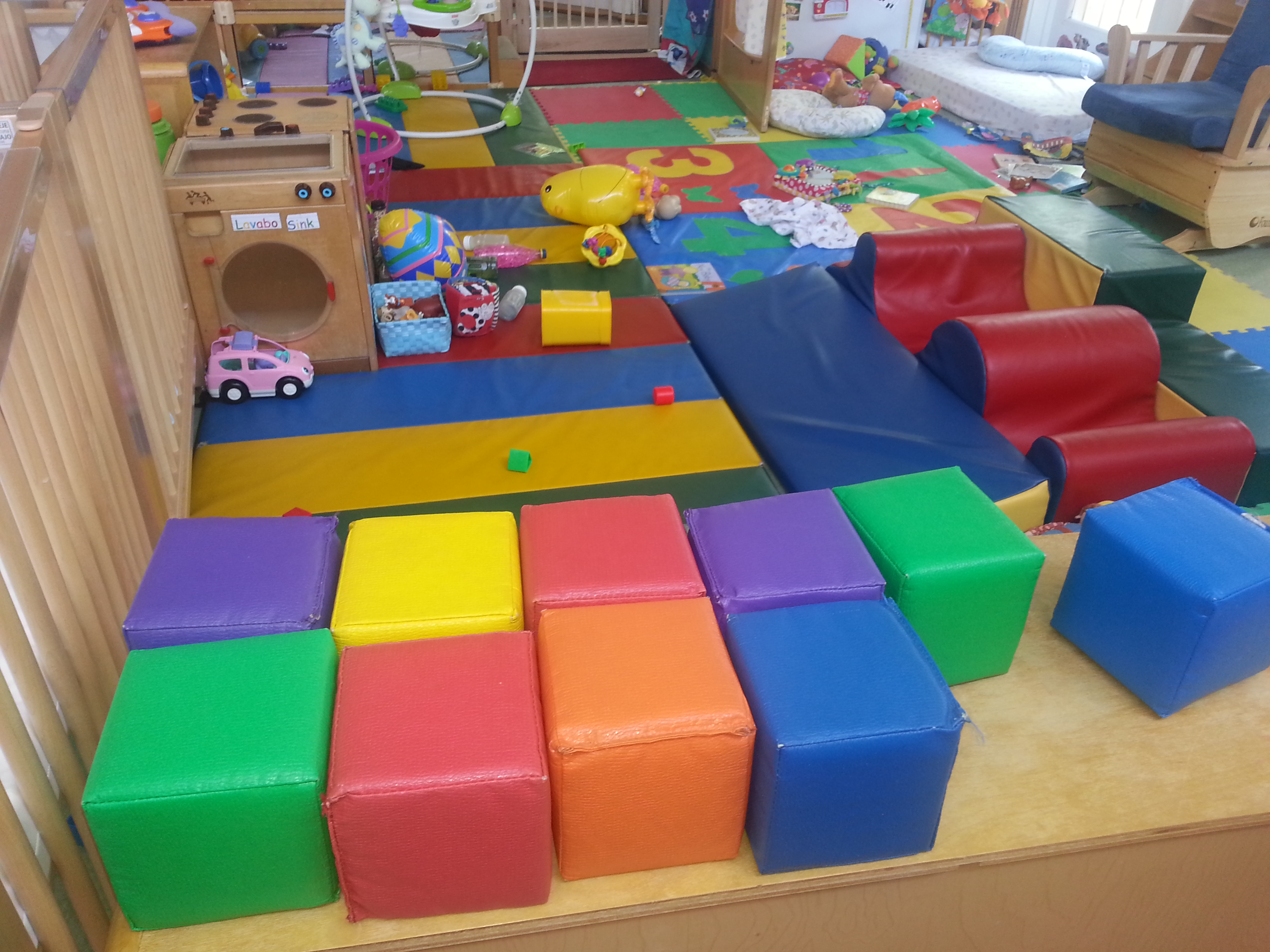 A Mother’s Dilemma in Finding Childcare

June 2013 The building was in good condition and you had to ring a doorbell to enter. Inside, everything appeared very clean and the children were hardly heard. The small rooms for the babies were painted in pastel colors, possibly to calm them down? This was the third childcare provider that I had visited with the hope of finding a place where they could take care of my baby, of seven months of age at the time, for a few hours a week. I was very alert.
For example, already at maximum capacity with eight babies (between six weeks and eighteen months old) and with two teachers for all of them, toys were not seen anywhere. Where are the toys? And the books? I asked and immediately the only two books for the whole group were passed to me. Regarding toys I only saw one gym (the type where the baby plays laying down, mouth up and touches an arc from which sound-makers and stuffed toys hang) and I was told that the other toys were packed up and stored, possibly so that they didn’t get worn out?

In reality, the first thing that really got my attention when the center’s director opened the door for us to the playroom of the little lambs—as they refer to the kids there—was that all the babies were placed in a spot where they couldn’t move around: a twelve month-old infant was in a walker, two six to eight month old babies were seated in high chairs (without any food in view), a four month old was awake looking at me from a hammock, and two more were sleeping in cribs. How easily they take care of them, I thought, they have them all tied up! Then I asked what it was they taught the infants, given that on their website it is advertised that they follow a learning curriculum appropriate for each child’s development. So the teacher just gave me a practical/theoretical demonstration. She pointed out to me a six month old baby that was seated a bit leaning towards the left and showed me a paper with a list that indicated that babies six months old should be able to, among other things: sit up straight, and said without any hesitation, “so I straighten them like this,” and immediately after straightened the baby. I fled the site, terrified.

Why is it so difficult to find a good childcare provider? Better said, what is a good childcare, and how does one find it? Keep reading this article to find the answers to these and other questions that we parents ask ourselves.

If you don’t use it, you lose it

A baby’s brain is in constant growth. From being a fetus in the uterus until approximately five years of age, the brain makes more and more connections so that the neurons function perfectly like an electric installation that allows the baby to see, hear, feel, taste, smell, and move around the world. But the most important thing is to understand that the experiences influence this development process. Neurologist Lise Eliot explains in her book, What’s Going On In There? How the Brain and Mind Develop in the First Five Years of Life, that “while there is still an excess of synapses, the brain will have a maximum plasticity and can develop itself in a variety of ways. But once this excess is lost, the critical period finishes and the brain must arrange the existing circuit; it cannot be changed for a faster computer.”

Here you have the crux of the question: the connections that the brain fails to make during infancy for lack of sufficiently stimulating experiences relative to its stage of development (or for lack of nutritious food) will never again be made; the brain will remain with a slow computer for the rest of its life. For example, it is known that older babies are attracted to vibrant colors, especially red, blue, yellow, and green. This excitement alone, according to Eliot, stimulates the neurons that control a baby's attention. So the pastel tones are more than just boring…

The emotional attachment that babies begin to feel for their mothers at six months of age is essential for their development. Emotions of security, confidence, and motivation are those that give them incentive to learn and grow strong. But according to census data, 61% of babies and children younger than five in the United States spend at least 10 weekly hours in the care of people other than their mother. In other words, three out of five kids in the country are cared for by a relative, a babysitter, or some type of childcare service while the mother does something else. On average, children of mothers that work spend 36 hours every week in the care of others (and 21 hours of mothers who don’t work).

Will all of these babies feel the same attachment to their mothers? Will it help or harm them to be separated in critical moments of their brain’s development? The answer: it all depends! Or in other words, quality is worth more than quantity. According to studies, the most important thing is that the person that cares for the baby is someone affectionate, receptive, and a stable figure in the child’s life. Of course the time that the baby spends with its mother is in reality what will most affect them (for good or bad). Children can become attached to various adults in the first years of their life—assures Eliot, “and while these relationships may be a source of security and healthy interactions, they will be a positive influence.” What’s more, if the daycare provider is of good quality, some advantages that children will show include: better social aptitude, more cooperative play, more popularity among their peers than children raised alone at home, and even better vocabulary.

The problem is that there are many daycere providers (centers or homes) that are licensed to operate, but that offer a service of low quality: too many children for too few adults, a depressing environment, a lack of toys appropriate for different stages of development, insufficient verbal stimulation, babysitters with little training and who frequently leave their jobs (which can be emotionally destabilizing for babies and small children), and even television sets! Unfortunately, in my search for a good daycare provider I found myself in two home daycares where the television was the center of activity. Upon asking about it, one of the nannies said to me, “it’s just that the babies here like to watch Dora!”

The United States Association of Pediatry recommends that children under two years of age do not watch television at all. The most important thing for the social and speech development  of babies is social interaction, which the television can not substitute. What’s more, there is evidence of an association between watching television and obesity in children.

In each county of the Hudson Valley there is a Child Care Council (CCC) that has a list of all the qualified places in operation and can advise without giving specific recommendations. They also have information about received complaints and can put together a list that is adapted to the needs of each parent, for example, that the child day care does not have a television. And if you qualify for help, they will also provide partial or complete payment for your childcare.

Aside from the required by law license to operated, there are some places that also have an NAEYC accreditation (The National Association for the Education of Young Children). This accreditation shows that these day care centers comply with higher standards than those required by the state. These NAEYC accredited places are concerned with educational services and the development of the children.

Once you have a list in your hands, the most important thing is to make a visit, speak to the teachers, and observe the babies. Do they seem happy? If it is possible, talk with other parents or even ask a pediatrician. It is a process that takes time, but it is worth for your baby.

And in case you were wondering: in the end I did find a day care center for my baby, who just turned one year old. The place upon which I decided has an NAEYC accreditation, affectionate nannies, colorful decorations, plenty of toys, and above all: they let the babies roll, crawl, and walk, exploring every corner.

*Do you have an experience with nurseries or babysitters? How did you decide to return to work? What are some of the advantages or disadvantages of your choice? What advice would you give to first-time moms? Write to us a [email protected] and make your voice heard!

*Translated from Spanish by Kevin Soto.